Black History Month – Progression of Diversity in the Workplace 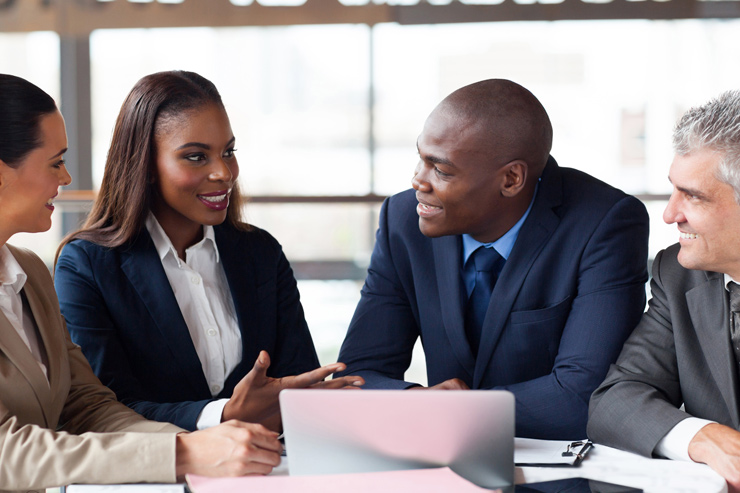 “In our glorious fight for civil rights,” said Dr. Martin Luther King Jr. in 1964, “we must guard against being fooled by false slogans, as ‘right-to-work.’ It provides no ‘rights’ and no ‘works.’ Its purpose is to destroy labor unions and the freedom of collective bargaining… we demand this fraud be stopped.” He was speaking of the “right-to-work” laws which emerged in the 1940s; laws which went into effect purely as a means to keep Jim Crow laws on the books and allow racism in the workplace to continue. We have come a long way since then, but many of Dr. King’s words ring true today.

“Our lives begin to end the day we become silent about things that matter,” for example, hits home the importance of reflecting on where we, as a country, have been, and where we need to be. It’s also one of the primary reasons why observing Black History Month each February is essential.

Prior to World War II, many jobs were simply not offered to African Americans or women. Blacks were relegated to low-level labor jobs and were often refused full-time union positions at places like shipyards. Women could work as typists and seamstresses, though opportunities were few and far between. World War II changed things quite a bit, with most able-bodied men of all races heading off to war, as well as a significant number of women as well. Blacks in the military accounted for just 4,000 members prior to WWI, but skyrocketed to 1.2 million during. However, the positions available still kept people boxed in. Blacks and women would serve in separate units and often in different capacities than white men.

Back in the states, new opportunities opened. Women entered the workforce in staggering numbers. Between the demand for skilled workers and well-planned protests and strikes, Black workers were also able to get into better positions.

President Harry S. Truman’s executive order was an attempt to desegregate troops. While people of any race could serve, the military was actively splitting up units based upon race. By going with the executive order, Truman was able to bypass congress. Though brief, the order declared:

“It is hereby declared to be the policy of the President that there shall be equality of treatment and opportunity for all persons in the armed services without regard to race, color, religion or national origin.”

Unfortunately, this order was created in a time of “separate but equal,” and many commanders received it as such. Troops remained segregated while following the letter of the law.

Eisenhower had a slightly different take on things, arguing that the behavior of the military was more a condition or “mirror” of American society at the time. He believed the military would not follow suit until American society, as a whole, was on board with desegregation. It wasn’t until 1954, under his eye, that the final all-Black military unit was disbanded. He also desegregated military bases and hospitals.

In 1961, President Kennedy set forth Executive Order 10925, which established the President’s Committee on Equal Employment Opportunity, or EEOC. Kennedy’s order not only made it unlawful for government contractors to discriminate, but also gave the EEOC the right to impose sanctions on any organization which violated the spirit of civil rights laws.

“It shall be an unlawful employment practice for an employer … to discriminate against any individual with respect to his compensation, terms, conditions, or privileges of employment, because of such individual’s race, color, religion, sex, or national origin.”

1970s- Now: The EEOC Expands its Reach, But Pay and Fairness Disparities Continue

There are disparities in fair treatment perceptions too. Roughly 22% of Whites feel there are issues with fair treatment of Blacks in the workplace, while 64% of Blacks feel that they are treated less fairly than Whites. More than one-in-five Blacks say they’ve been treated unfairly in hiring, pay, or promotion due to race/ ethnicity in the past year alone, while 40% say their race has made it harder to succeed in life. Compared to 4% of Whites who feel they’ve been treated unfairly in the past year and 5% who say their race has impacted their success, it’s clear gaps not only persist, but that a huge portion of the public is not even aware that they do.

Back in the early 1900s, Henry Ford made a commitment to diversity. He offered higher pay than virtually any other employer and intentionally attracted African American workers. We all know how that panned out for him. His company became one of the most successful businesses in modern times. It wasn’t a fluke. According to research by McKinsey:

Help Your Company Grow with Diversity and Inclusion Services

A diverse and inclusive work environment isn’t something that just happens. It has to be cultivated. If your company is ready to reap the benefits, book a free consultation to tap into our D&I services and begin developing one today.

The HR Source March 24, 2022
Read More »
PrevPreviousHow to Build a Resume Employers Will Love
NextHow to Bring Fun to Your Organization in March MadnessNext